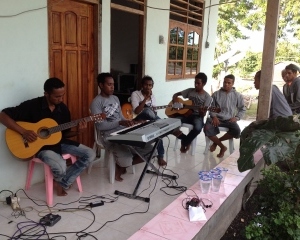 We were introduced to a group of young men plus their leader who were performing at a high standard of musical talent in the provision of music for various ceremonies, weddings and other celebratory events. Lacking in suitable sound and musical instruments lead to their income from these various concerts disappearing with the need to hire sound and musical instruments

We were able to supply financial backing to purchase equipment, enabling them to avoid hiring costs.  This has led to the group financing  the production of their own music on CDs which have been commercially promoted and sold.

In addition to this they have encouraged and supported the formation of another group who noted the success of this group. Unemployment and lack of recognition of the contribution of youth has been addressed in this project as well as providing the individuals in the group with a share of the income from their various paid performances.