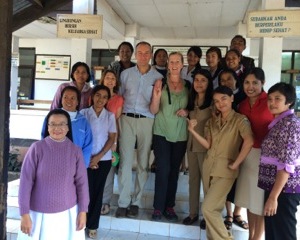 From July 20 to 24 2015 a small team from FOHG underwent teaching of obstetric emergencies in Soe, West Timor. The team was Dr Peter, an obstetrician from Canberra Hospital, midwives Ann Maree and Tammy from Calvary Hospital in Canberra, and our translator Nus.

This was the first such trip for Tammy, and the fourth for Ann Maree. Half of Tammy’s airfare was provided by Flinders Overseas Health Group.

Arrangements for the trip were put in jeopardy by the eruption of Mt Raung and potential disruptions of flights in and out of Bali, but we were fortunate in our flights all going as planned.

On the topic of internal flights: Nus gave us the name of an online booking service, which proved completely adequate - and certainly far more convenient than picking up tickets from an agent in Kuta as we have done in the past.

Once again we made use of Udayana Lodge in Jimbaran, for our overnight stay on the way out to NTT, and as a resting place between arriving back in Bali on the Saturday afternoon, and leaving late that same night.

We were met at Kupang airport and travelled by car to Soe, a three to four hour drive. As always these drives are much more enjoyable when done in daylight hours.

The teaching took place in the Soe convent of the Religious of the Virgin Mary. The participants were midwives - several of whom were also nuns of the order, and junior doctors. They came from a variety of clinic and hospital settings, including two midwives from the local general hospital in Soe, and the midwife in charge of the largest local puskesmas or health centre.

The teaching was, as in the past in Ende and Nagakeo, very interactive and hands-on, using short PowerPoint presentations and practical training with manikins. Topics covered included neonatal resuscitation, management of post-partum haemorrhage, shoulder dystocia, and breech birth. As and been our experience in Ende and Nagakeo, the participants were very enthusiastic about this style of training. Each morning the topics from the previous day were re-capped, especially neonatal resuscitation.

All of the participants reported a valuable and rewarding experience, and we are hoping that this may be the first of a number of teaching trips to Soe, particularly as the RVM will soon be opening a new health centre/hospital in Soe, which is being built with the assistance of FOHG. One of the great plusses of this type of training is it’s simplicity and sustainability, and the “filter-down” effect of the skills taught. These participants could form the nucleus of a training team which could be based at the new facility.

We were also taken on tours of the local hospital and puskesmas, and at the end of the week, by Sr Yasinta, the maternity section of the Johannes Hospital in Kupang ( the largest unit in NTT). This was a revealing insight into the basic facilities available in the area, particularly compared to those which we take for granted in Australia.